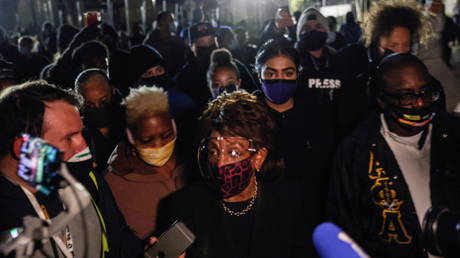 Congresswoman Maxine Waters made a sudden appearance in Brooklyn Center, the hotspot of week-long protests over the killing of 20yo Daunte Wright, all but encouraging the crowd to defy an emergency curfew imposed by the city.

Hundreds of protesters rallied outside Brooklyn Center, Minnesota police station for the seventh day in a row, when US Representative Maxine Waters (D-CA) showed up around 10:30pm Saturday and addressed the crowd with a brief and emotional speech.

With less than 30 minutes before yet another emergency curfew was due to kick off, journalists at the scene asked Maxine about the restrictions and what the protesters should do if Derek Chauvin is acquitted next week.

Democrat Rep. Maxine Waters says she doesn’t recognize the curfew and encourages people to break it and says she hopes the protests will continue. pic.twitter.com/nVpzX2yH6K

However, when asked if personally was going to stay in the streets, as the curfew was looming, Waters said: “I’m not gonna stay out here.”

Also on rt.com
Surreal scenes in Minneapolis, as National Guardsmen order woman out of car AT GUNPOINT at gas station (VIDEO)

“I came here from Washington just to be here, to make sure that I let my voice be heard among all of those who have been spending so much on the streets..,” Waters added. “So I’m hopeful that the protest will continue.”

As the curfew went into effect at 11pm, “fewer than 150 protesters remain on site,” Minnesota’s public safety information center, dubbed Operation Safety Net, said, thanking everyone who have left ahead of the curfew and wishing them a “pleasant evening.”

On Friday night alone, some 100 people were arrested for not following a dispersal order. Meanwhile, in addition to the Daunte Wright protests, law enforcement is bracing for a verdict in the murder trial of Derek Chauvin, the former police officer accused of killing George Floyd last year.