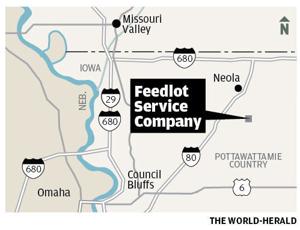 Alison Manz, an inspector with the Iowa Department of Natural Resources, said the investigation was prompted by citizen complaints about Feedlot Service Co., a small feedlot south of Neola and about 20 miles northeast of Omaha. Also of concern was runoff from the feedlot that was entering the nearby Keg Creek.

There is no license that allows for the spreading of animal parts on fields, said Manz of DNR and Keely Coppess, a spokeswoman for the Iowa Department of Agriculture and Land Stewardship.

Fred Roane owns the company and has told the state, according to regulators, that he has a license to dispose of “paunch manure” on his fields. Paunch manure is the partially digested contents of the stomachs of slaughtered animals.

The agriculture department does not issue such permits, Coppess said.

Roane was unavailable for comment, according to the person who answered the phone at the feedlot.