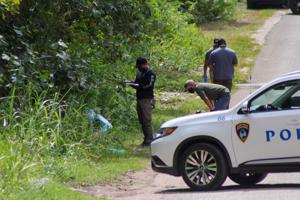 A driver passing by Swamp Road in Dededo alerted authorities that he saw the body of a man shortly before 1:30 p.m. in the area.

Police spokesman Sgt. Paul Tapao said it’s too early to say whether there are signs of injuries or other signs of foul play.

Police do have an idea who the dead man is following the reaction of a distraught woman who was seen at the scene. Police are not identifying the man just yet.

Sources said the man was a former prison detainee.

“We are still in the preliminary stages of the investigation,” said Tapao. He said it is considered a death investigation, pending an autopsy.

Police are interested in anything unusual that may have been seen or heard along Swamp Road or Hahasu Drive.

Police do want the public to call if they happened to be in or near the area and noticed something unusual – such as the revving of a vehicle engine or raised voices or an argument – to call police at 472-8911.

Police are interested in the time frame between noon to 1:30 p.m. Thursday.

Police are also waiting for a medical examiner to arrive on the island for the death investigations involving:

• the 2-year-old boy who died a few days ago after he went missing and later found unconscious on the shoreline by Alupang Beach in East Hagåtña.