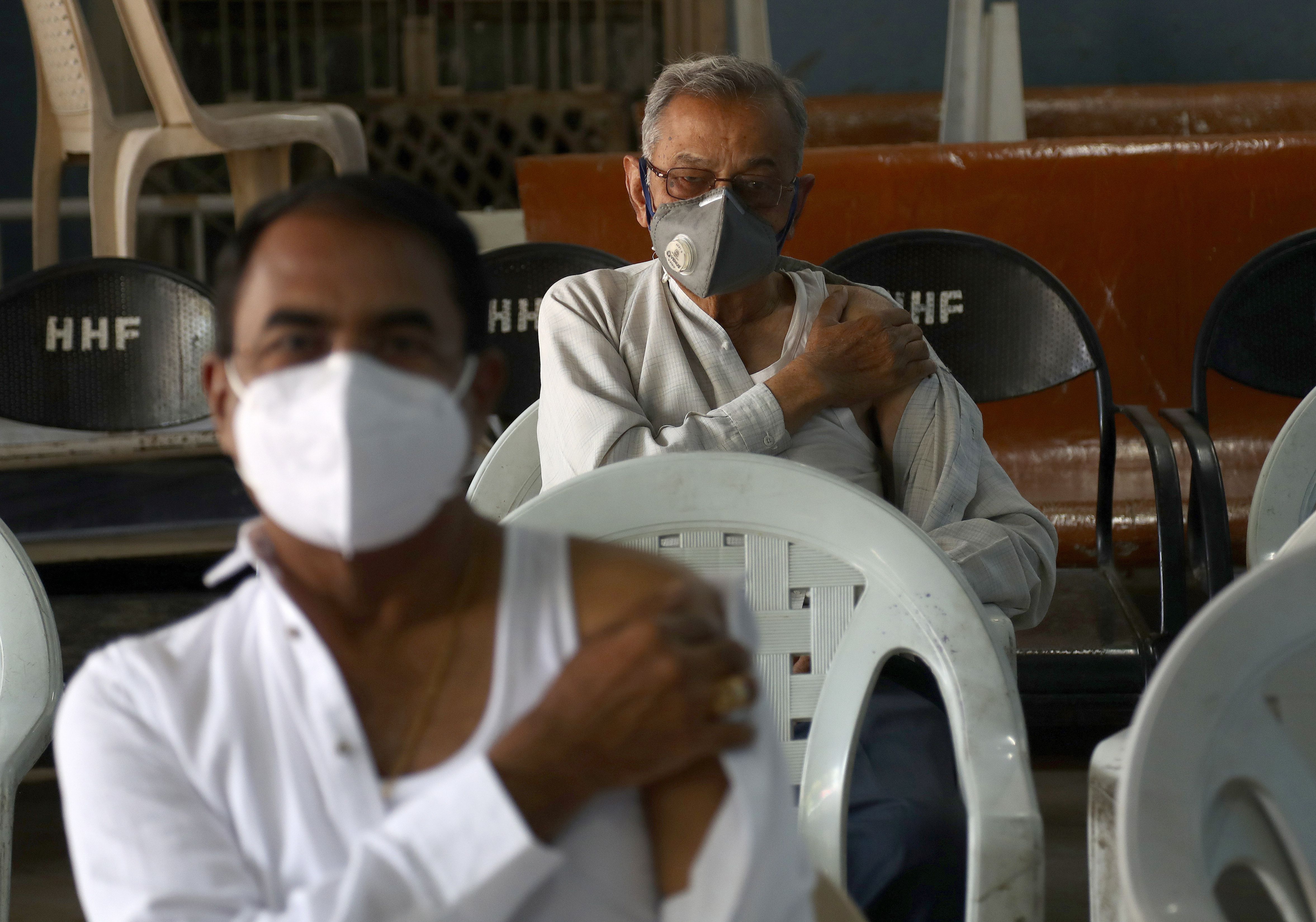 BERLIN — Germany’s health minister says the country should prepare for “several very challenging weeks” amid a rise in coronavirus cases.

Health Minister Jens Spahn told reporters in Berlin on Friday that “the situation remains tense,” as the country’s disease control center reported 12,834 newly confirmed cases in the past day, and 252 new COVID-related deaths.

The head of the agency, Lothar Wieler, said Germany is “at the beginning of the third wave” of infections following surges in cases last spring and in the fall.

Spahn noted there has been a drop in serious illnesses and deaths among the elderly, as most people over 80 in Germany have now received a virus vaccine.

He said Germany has managed to administer more than 200,000 first shots daily this week. As more supplies arrive, shots will be administered not just in special vaccine centers but, from mid-April, also in doctors’ practices, said Spahn.

— The pandemic has taken a huge toll on children’s mental health, with doctors saying virus-related phobias, tics and eating disorders rising along with attempted suicides.

— AP-NORC poll: 1 in 5 in US lost someone close in pandemic

— Austria is embarking on an ambitious drive to inoculate residents of a district particularly hard hit by the South African variant of the coronavirus.

— The European Medicines Agency has given Johnson & Johnson’s one-dose coronavirus vaccine the green light, giving the European Union’s 27 nations a fourth vaccine to use

HERE’S WHAT ELSE IS HAPPENING:

GENEVA — The World Health Organization says it’s assessing reports of rare blood coagulation problems faced by some people in the European Union who received doses of the AstraZeneca vaccine against COVID-19.

The U.N. health agency noted the decision of a few European Union countries to suspend use of the vaccine based on reports of the rare disorder in people who received the vaccines from a particular batch.

It noted that the European Medicines Agency has determined that the vaccine’s benefits outweigh the risks, and said that no cases of death have been found to be caused by any COVID-19 vaccines so far.

A WHO advisory committee on vaccine safety is “carefully assessing” the reports and will communicate its findings and any changes in its recommendations to the public.

“Deaths from other causes will continue to occur, including after vaccination, but causally unrelated,” WHO said.

BANGKOK — Thailand delayed use of the AstraZeneca vaccine on Friday after several European countries temporarily suspended the jabs following reports of blood clots in some people.

A publicity event with Thai Prime Minister Prayuth Chan-ocha receiving his first shot was canceled with dozens of media attending, less than an hour before the scheduled start. Instead, health officials held a news conference to explain the delay was based on the decision made by Denmark, Austria and others as a precaution. The Danish health authority said Thursday it has no evidence the vaccine was responsible for blood clots.

Other experts pointed out that of the millions of AstraZeneca vaccine shots administered elsewhere, including in Britain, there have been no reported cases of the vaccine causing blood clots or related problems.

Yong Poovorawan, an advisor to Thailand’s vaccination program, said the delay, pending an investigation into the cause of the reported side effect, will not have a big impact on the rollout.

Thailand started its vaccination drive last month with an initial 200,000 doses of China’s Sinovac and 117,000 doses of AstraZeneca, which is also being manufactured locally.

The country aims to inject 10 million doses a month from June, and plans to cover at least half its population by the end of the year, though some say the campaign is too slow and inadequate.

LJUBLJANA, Slovenia — A school in Slovenia cancelled classes on Friday after 26 teachers called in sick due to vaccine side effects.

Slovenian media say the staff at the school in the northwestern town of Velenje received AstraZeneca jabs on Wednesday and later reported side effects to the jabs including strong headaches, dizziness, high fever and nausea.

The head of Slovenia’s National Public Health Institute Milan Krek told public broadcaster RTV Slovenia reactions such as increased body temperature and fever are among the listed side effects for the vaccine. The reactions are being registered and will be reviewed before further decisions are made, said Krek.

The school has informed the parents that they do not have the capacity to hold classes and that the school will shut down on Friday except for day care for smaller children.

NEW DELHI — India has registered its worst single-day jump in coronavirus cases since late December with 23,285.

The sharp spike is being attributed to the western state of Maharashtra.

India has so far reported more than 11.3 million cases, the world’s second-highest after the United States. Infections have been falling steadily since a peak in late September, but experts say increased public gatherings and laxity is leading to the latest surge.

The increase is being reported in six states, including Maharashtra where authorities have announced a weeklong lockdown in the densely populated Nagpur city next week. The vaccinations there will continue.

India is in its second phase of the COVID-19 inoculation campaign and plans to vaccine 300 million people by August. The vaccination drive that began in January is still running way below capacity.

More than 26 million people have gotten a shot, though only 4.72 million are fully vaccinated with both doses.

TOKYO — Transportation Minister Kazuyoshi Akaba says Japan will tighten border controls and limit the number of entrants to up to 2,000 per day to guard against the more contagious variants of the coronavirus.

The health authorities have found the cases of the new variants to have quadrupled over the past month. They said the cases have been found in about half of Japan’s 47 prefectures but need to be closely watched and precautions should be increased.

Tokyo and its three neighboring prefectures are under a non-binding state of emergency since Jan. 7. The measure, which was to end on March 7 in those areas, has been extended for two weeks as the infections have not slowed enough.

MANILA, Philippines — Mayors have decided to reimpose a 7-hour night curfew in the Philippine capital region of more than 12 million people amid a spike in coronavirus infections, which forced dozens of villages to be placed back under police-enforced lockdowns.

Authorities would enforce the 10 p.m. to 5 a.m. curfew for two weeks starting Monday in Metropolitan Manila, where most cases in a new surge of infections have been reported this week, said Benhur Abalos, who heads the Metropolitan Manila Development Authority.

The Philippines has reported the highest number of confirmed infections at more than 600,000 and more than 12,500 deaths among 24 pandemic-hit countries in the Western Pacific region, the World Health Organization said.

President Rodrigo Duterte said Thursday he did not know how he could considerably ease quarantine restrictions when cases continue to surge. He said he may be able to further reopen the economy when millions of Filipinos have been vaccinated. But the government’s vaccination campaign has faced supply problems and public reluctance.

“We cannot forever be in the strict protocols because we have to open the economy. People are hungry … they have to work, to eat, to survive,” Duterte said. “I am, I said, in a quandary of what to do.”

SEOUL, South Korea — South Korea is extending its current measures on social distancing for at least another two weeks as it struggles to slow coronavirus infections in the greater capital area.

The measures include clamping down on private social gatherings of five or more people nationwide and prohibiting indoor dining at restaurants and bars in the Seoul metropolitan area after 10 p.m.

Senior Health Ministry official Yoon Taeho said during a briefing Friday that health authorities will inspect shopping malls, restaurants, public baths and private tutoring academies in the capital area over the next two weeks and have employees tested if their working conditions are seen as highly vulnerable to infections.

While South Korea has wiggled out of its worst wave of the virus that saw its daily jump in infections reach 1,241 on Christmas Day, it has still been seeing 300 to 400 new cases a day since mid-January. Around 75% of them reported from the Seoul metropolitan area, which is home to half of the country’s 51 million people.

The country reported another new 488 cases of the coronavirus on Friday, bringing its caseload to 94,686, including 1,662 deaths.

WINDOW ROCK, Ariz. — Navajo Nation officials cited a declining number of new COVID-19 cases and other improving conditions as they announced a new public health order that will allow some businesses to reopen under certain restrictions. That includes the tribe’s four casinos.

However, officials said a separate new health order will keep the daily curfew for residents of the tribe’s reservation from 9 p.m. to 5 a.m. in effect. Both orders will take effect Monday.

Officials cited testing availability, hospital capacity and contact tracing in addition to the decrease in new cases as factors in the transition to a status allowing some businesses to reopen under restrictions that include capacity limits.

LOS ANGELES — California officials are contemplating what things will look like in the nation’s most populous state once millions of people are vaccinated and they move to phase out restrictions on gatherings and businesses that have altered life for a year.

When officials last summer designed the four-tiered, yellow-to-purple system California now uses to decide whether people can dine indoors, go to the movies or gather with friends, they did not include a green tier — a recognition that a return to normalcy after the pandemic was far off. Now, Gov. Gavin Newsom’s administration is preparing to add one.

“The likelihood of hitting that green tier is probably sooner than some of us thought when we were looking at the summer and fall,” Dr. Mark Ghaly, California’s health secretary, said Thursday.

State officials rely on a complicated formula, including virus spread, to determine which activities are restricted in each county.

But a green designation won’t mean “go” for all things. Ghaly said such a label would still mean wearing masks and staying physically distant. He declined in an interview to offer more specifics on what restrictions would be maintained or to provide a threshold of vaccinations the state hopes to meet to allow such a go-ahead.

Earlier Thursday, state Public Health Director Dr. Tomas Aragón forecast that California could achieve herd immunity when about 75% of the population has been vaccinated, though that could change as the virus mutates.

WELLINGTON, New Zealand — New Zealand has removed remaining coronavirus restrictions on the city of Auckland after containing a small outbreak.

Prime Minister Jacinda Ardern announced Friday the city of 1.6 million would join the rest of the country in having no restrictions other than an ongoing requirement to wear masks on public transport and planes.

After a community outbreak of 15 cases last month, Auckland was placed first into a three-day lockdown and later into a weeklong lockdown. Since the end of the second lockdown Sunday, the city had continuing restrictions on crowd sizes.

New Zealand has adopted a zero-tolerance approach to the virus and eliminated community spread.

“I know everybody in our largest city will be looking forward to a weekend with fewer restrictions, with life feeling mostly back to normal,” Ardern said. “And Auckland deserves that. Once again, the city has stepped up.”

Copyright 2021 The Associated Press. All rights reserved. This material may not be published, broadcast, rewritten or redistributed without permission.