There hasn’t been as much sports as we’d like to see in 2020, but there were still moments that stood out and are worth revisiting.

Let’s hope for a lot more sports in 2021 as we look back on the year that was.

The year 2020 was a year like no other in prep sports. The COVID-19 pandemic swept through the nation and it had reached Minnesota by late winter.

Athletes have had to learn about masks, social distancing and keeping their ‘bubble’ small, while also having to attend school virtually from home.

Winter sports have yet to begin, but there is hope for a season in 2021. However, it is still unlikely that there will be any state tournaments this school year.

Logan Kelly swims in the 100-yard breaststroke for the Packers in Jean K Freeman Pool in Minneapolis in the state tournament in 2020. Herald File Photo

The Packers put out one of their best teams in school history and had one of its best state meet performances ever as it had three top-three finishes and eight medal winners.

Austin’s best finish of the meet came from the 200-yard medley relay team of Rafe Dolan Peterson, Logan Kelly, Trey Myers and Aaron Knoll, who finished in second place with an All-American time of 1:32.66.

Dolan Peterson is now on the University of Wisconsin-Green Bay swimming team and Kelly, a senior, has committed to swim at the Indiana University-Purdue University Indianapolis

Both Gach. Brad Rempel/University of Minnesota

After spending his senior year of high school with Arizona Compass Prep Academy and two years with the Utah Utes, Gach made his way back to Minnesota when he officially transferred to play basketball for the Minnesota Gophers.

Gach, a junior, has been starting at shooting guard for the Gophers and has helped the team in all areas. 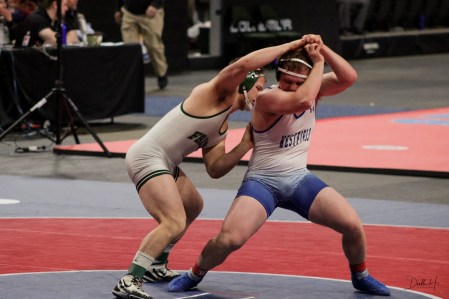 Colton Krell wrestles in the Minnesota Class A finals at Xcel Energy Center this past season. Photo by Double H Photography

Colton Krell became the first Westfield Razorbacks wrestler to win a state wrestling title when he won the Minnesota Class A championship at 195-pounds. Westfield is a team composed of wrestlers from Blooming Prairie and Hayfield.

Krell pinned previously unbeaten Tyler VanLuik to win the title. He finishes as the all-time wins leader at BP finishing his high school wrestling career with a record of 181-34 overall.

Krell also won a state title with the BP football team in 2019, giving him a banner senior year.

5. Kicking it into high gear

The Packers boys soccer team wasn’t able to play in a fourth straight state tournament due to COVID-19, but it was still a dynamite year on the pitch.

The Packers, who also won their fourth straight Big Nine title this fall, clinched the Section 1A crown to close the season when senior keeper Casey Berg made two shootout saves in a 2-1 victory over Dover-Eyota.

That win was followed by some huge awards for Austin as Henry Tolbert was named Class A Mr. Soccer and was one of 59 players selected to the United Soccer Coaches Association Fall High School All-America team and head coach Jens Levisen was named small school head coach of the year by the USCA. 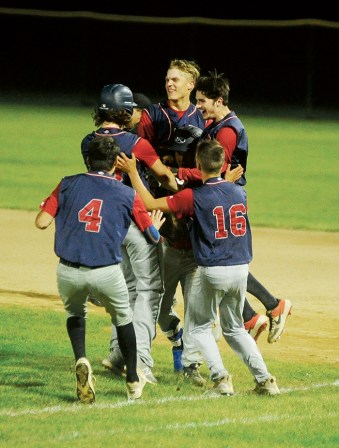 Members of the Austin 18U baseball team celebrate their win over Rochester John Marshall in Marcusen Park this summer. Herald file photo

It wasn’t the ending they wanted, but the Austin 18U baseball team was happy just to have a summer season.

The Austin 18U baseball team made the summer last a little bit longer, but couldn’t lock up the Three Rivers championship when they lost to Rochester Mayo 6-5 in a game that went nine innings and lasted three hours in Marcusen Park.

Austin, which used a bulk of Lyle-Pacelli players, was able to put together a successful season after Big Nine coaches quickly organized a league when the American Legion decided not to play summer baseball.

It was a surreal night in Mayo Civic Center as the Awesome Blossoms took down their Highway 30 rivals – — the Hayfield Vikings in a 59-51 Section 1A championship victory.

The win gave BP its first section title since 1966, but the Awesome Blossoms were denied a trip to the state tournament when all sports were cancelled due to the COVID-19 pandemic on the following morning.

Gabe Hagen had 23 points, four assists and five rebounds in his final contest as a Blossom.

The game, which was played in a packed Mayo Civic Center, was one of the last games played with a full crowd before the pandemic. 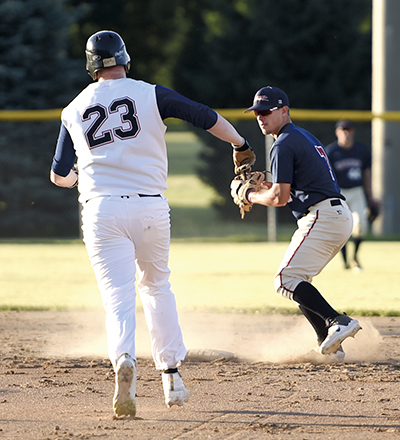 8. Return of the Hounds

The Austin Greyhounds have made a surge into relevancy in the past two years and the summer of 2020 saw the team draw some of its biggest crowds in the past decade.

When the Hounds opened their season in late June, they had a huge crowd, and that following continued as the team filled the diamond with former college standouts and high school prospects alike.

A lot of credit goes to Hounds manager Joe Ciola for putting in the time to bring amateur baseball back into the public interest.

The Superlarks knew there would be no state tournament as a sports shutdown was looming and they also were missing half of their regular lineup due to a COVID-19 contact, but that didn’t stop them from giving it their all when they lost to Lanesboro 16-12 in the Section 1 Nine Man football title game.

GM had to resort to a roster packed with JV players in the loss, but the team showed a lot of heart in defeat.

Blooming Prairie’s Megan Oswald goes up strong against Fillmore Central in the first half of the Section 1A championship in March. Herald file photo

The Awesome Blossoms girls basketball team wasn’t able to finish the job, but they did have one of their most productive seasons in 20 years.

BP missed out on its first state berth since 1999, when it lost the Section 1A title game to Fillmore Central 69-56.

The second place section trophy is just the third piece of section hardware the Blossoms have taken home in school history.