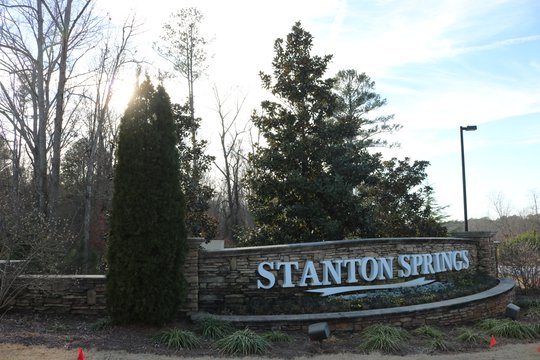 Commissioners voted for agreements with the data center developer — identified as Baymare LLC — as well as three neighboring counties and a joint development authority — for the project planned for a site in the park near Social Circle.

The commissioners’ votes followed the Joint Development Authority (JDA) of Jasper, Morgan, Newton and Walton Counties’ Feb. 23 approval of a $42 billion bond issue to Baymare LLC for an unnamed, large-scale data center project; and a purchase and sale agreement for more than 628 acres of land priced at $62,500 per acre.

Stanton Springs includes more than 1,600 acres and straddles Newton, Walton and Morgan counties. Its main occupants are Takeda Pharmaceutical and a Facebook data center, with plans announced in 2020 for an additional Facebook data center to bring its total investment in the park to $1 billion, company officials said.

Serra Hall of the Newton County Industrial Development Authority told Newton commissioners Tuesday the bonds were not approved “through any debt to any of the four counties.”

“I want to make sure that that is not debt that will come back to you or any citizen of Jasper, Newton, Morgan or Walton county,” Hall said. “They are on behalf of the company.”

The financing will be issued as “phantom” bonds in which the JDA issues them and Baymare purchases them, said Shane Short of the Development Authority of Walton County.

The JDA then will take title to the project and lease it to Baymare for a period of time so the bonds can remain tax-exempt, Short said on Feb. 23.

District 4 Commissioner J.C. Henderson on Tuesday told commissioners he was concerned about giving incentives to a new company when Facebook had done very little “outreach in communities” since its announcement.

“We’ve got these bigtime companies and … and it seems like they give little to nothing to the ‘reason for the season,’ the citizens of Newton County,” Henderson said.

However, Chairman Marcello Banes said Facebook had donated more than $2 million in 2020 to the school system and local small businesses in the four counties.

County attorney Sam VanVolkenburgh said the agreement for the new project closely follows one made with Facebook before the social media company announced its intention to build in Stanton Springs in 2018.

However, the agreement differs from the 2018 pact because it states Newton County will do all permitting work for the project even though parts of the site are also located in Walton and Morgan counties, VanVolkenburgh said.

He said that plan will make it easier to meet the agreement’s requirement that expedites decisions from the permitting office by requiring it to process — within 10 days from the original requests — permits and other matters needed to complete construction.

Henderson asked if the plan would require the county Development Services department to hire more staff.

County Manager Lloyd Kerr said no additional employees will be needed because in a “project this size” the company typically hires its own inspectors to make sure work is being done to the county’s satisfaction.

He said he believed “we have a great team of people down at Stanton Springs, and we have a great economic development team” working for the Joint Development Authority, including Hall and Short.

Baymare will make payments in lieu of taxes, or PILOTs, starting in April 2027 at $2 million and increase by $1 million every two years until April 2033, totaling $5 million per year. The payments will be due even if the phases are not completed on time, officials said.

Newton and Walton counties will receive 37.5% of the revenue, Morgan County will receive 15% and Jasper County 10%.

The PILOT payments will compensate the four counties for lost tax revenue due to the tax-exempt status of the property.

Though Baymare will appear to make rent payments to cover debt services on the bonds, no money will change hands since the company will have bought the bonds.

School and county property taxes will be abated during construction.

As part of the deal, Baymare will also provide up to $3 million to fund construction of a two-lane frontage road that runs parallel to the project and a spur to improve traffic flow, which will begin as soon as the deal is completed.

Baymare will also pay the JDA a bond issuance fee of $1.5 million.

Construction of the planned 2-million-square-foot data center will be done in phases, bond documents state.

Bond documents for the development state Baymare is a Delaware limited liability company — the same legal status Morning Hornet LLC had in 2018 bond documents before it was revealed to be Facebook.

An official announcement to reveal the unnamed industry is expected after the deal is finalized later this month, officials said.

Publisher and Editor Taylor Beck contributed to this report.