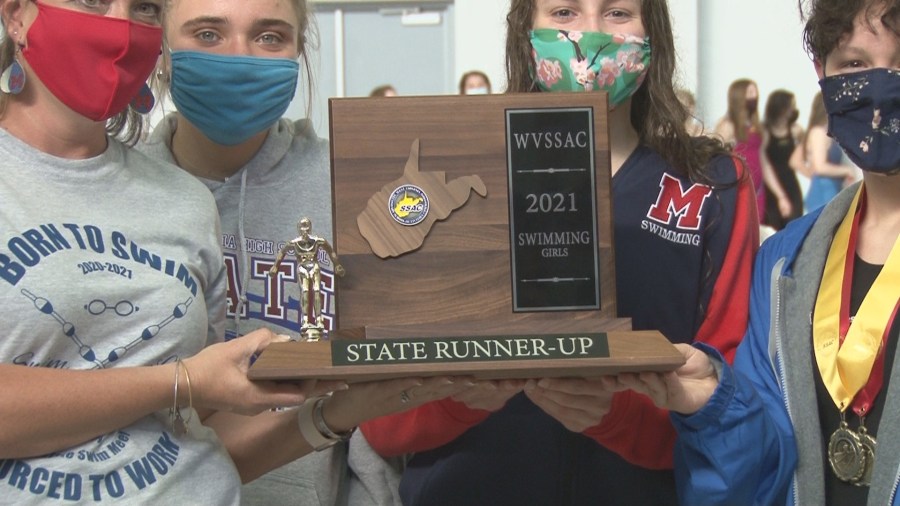 Morgantown, led by Caroline Riggs and others, finished as the state runner-up, finishing 50 points behind George Washington, who repeated as state champs in both the boys and the girls sessions.

Riggs claimed a pair of individual state titles, one in the 100 butterfly and the other in the 200 freestyle relay, while also earning two other second place finishes. It was a great way to cap off another successful season for her.

“We went in there knowing we were going to have to race our hardest. Last year we got out touched, so I think we kind of had an extra push of motivation, because we wanted to redeem ourselves from last year, and I think everyone did,” Riggs said when asked about the 200 freestyle relay, in which the Mohigans just got to the wall before rival Buckhannon-Upshur. “I’m very grateful, I’m very excited, and we still have the same group of girls next year, so hopefully we can do it again.”

Locally, Riggs and Buckhannon-Upshur’s Cadence Vincent were the two biggest stories from the girls championship.

Vincent was not only part of two relay teams that finished in second place, but won the 50 and 100 freestyle events, while shattering state record, and making some history along the way.

“My 50 free, I just wanted to get the 23.2 for my all-American time, and I still have the state record in that from last year, and I got that,” said Vincent. “I didn’t know (the all-American time) existed until my Y coaches told me about it. It’s the highest honor you can go besides the state record. I’m really proud to have that, but I just went in for my 50. And I actually just missed the 100 by (0.1).”

As a team, Morgantown finished the day in second place (156.5). Buckhannon-Upshur (123) finished in fourth, with Bridgeport (120) not far behind in fifth place. Fairmont Senior (89) placed sixth in the state as a team.

Riggs and company set the school and state record in the 200 free relay.

Fairmont Senior’s Mia Abruzzino may have finished third in the 500 freestyle, but she broke a school record that was most recently held by her older sister.