Bom Kim is the founder of e-commerce giant Coupang.

Bom Kim sold his first venture fresh out of college. Fast forward two decades, and the serial entrepreneur is joining the ranks of the world’s richest with the listing of his Coupang Inc.

Shares of the e-commerce giant, backed by SoftBank Group Corp., surged as they began trading in New York on Thursday. The South Korean company –dubbed “Korea’s Amazon” — is now valued at more than $84 billion, giving Kim, 42, a stake worth $8.6 billion, according to the Bloomberg Billionaires Index.

Coupang is Korea’s largest listing and the biggest by an Asian company on a U.S. exchange since Alibaba Group Holding Ltd. While it’s still loss-making, revenue almost doubled last year as the pandemic boosted online shopping. 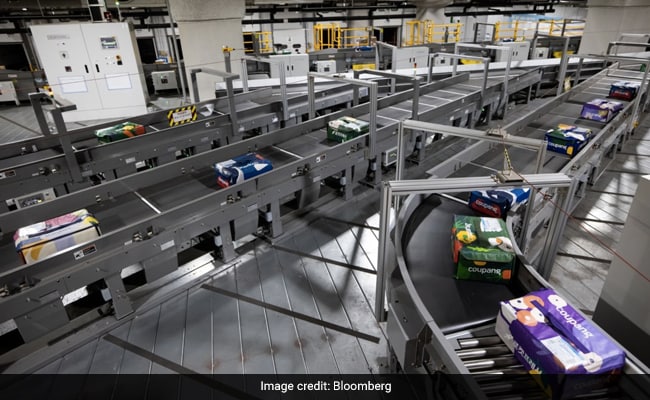 Inside the Coupang fulfillment center in Bucheon.

“Our slogan from the early days of the company was to create a world where customers ask this one question, which is ‘How do I ever live without Coupang?'” Kim said in a panel discussion organized by the Milken Institute in 2019. He went on to say it was investors such as SoftBank that helped Coupang embark on building a “long-term play” for customers.

The company priced its share offering above a marketed range, raising $4.6 billion and valuing the company at approximately $60 billion. Its shares traded as high as $69 on Thursday before dropping to $49.25 in New York, 41% above its offering price.

SoftBank is the largest Coupang shareholder with a stake that’s now valued at approximately $28 billion. The Japanese conglomerate injected $1 billion in Coupang in 2015, and its Vision Fund put in another $2 billion three years later.

Coupang is said to have handpicked a limited number of investors for the IPO. An unusually large proportion of investors who placed orders ended up getting no allocation, according to people with knowledge of the matter.

A Coupang representative declined to comment for this story.

Born in Seoul, Kim moved to the U.S. when he was in middle school and later obtained U.S. nationality. While doing government studies at Harvard University, he started a student publication called Current Magazine discussing ideas from writers across colleges, which he sold to Newsweek in 2001. After trying other ventures — he sold another media company in 2009 — and dropping out of a Harvard MBA, he went back to Korea. Inspired by Groupon Inc.’s business model, he set up Coupang in 2010, and the company grew to become the nation’s first unicorn in 2014.

Backed by SoftBank’s investment, the e-commerce company was able to come up with a one-day service called Rocket Delivery. Korea’s workaholic culture — Kim’s offspring often came home after 10 p.m. following cram school — prompted Coupang to come up with a service that delivers products ordered from an app within hours, he once said.

“The constraints that have forced us to build a solution are unique to Korea, but who wouldn’t want this service anywhere in the world?” Kim said during the 2019 panel discussion. “Customizing our solutions around the constraints in the market to fulfill universal needs is really unique, and that’s really behind our growth.”

The Covid-19 pandemic that hit the world last year gave the business another boost, and net revenue almost doubled to $12 billion in 2020. While Coupang’s $475 million loss was smaller than in 2019, the company warned in its prospectus it might not be able to achieve or maintain profitability in the future.

“Coupang is definitely not a case of temporary growth,” said Lee Jiyoung, an analyst at NH Investment & Securities Co. in Seoul. “Its losses shouldn’t be too worrisome because they are spending for things such as expanding logistics centers or investing in IT. It’s for further growth.”

Despite the company’s popularity, it has faced scrutiny after reports of several deaths among delivery and logistics employees who were allegedly overworked. According to local reports, the latest case is a delivery man in his late 40s who worked for a year from 9 p.m. to 7 a.m. Coupang said in a statement his death this month wasn’t due to his workload.

In an interview Thursday on Bloomberg TV, Kim said Coupang has had one “work-related death” in the past year. “But one is too many. And we have to continue to do better. We are actually leading the industry on this front,” Kim said. The company allows workers to have weekends off and offers vacation days and insurance, he said.

During a parliament hearing in February, Joseph Nortman, Coupang’s head of fulfillment services, reversed his company’s initial stance and apologized over last year’s death of a logistics worker after a government investigation found it was related to his job. Separately, the e-commerce firm said it would grant its warehouse staff and 15,000 full-time delivery workers as much as $90 million worth of restricted stock.

“What takes you to the next level is to not settle because customers will never settle,” Kim said in 2019. “Challenge yourself and say ‘how can you let the customer have it all?’ If the customer has it all, they can’t live without you.”

(Except for the headline, this story has not been edited by NDTV staff and is published from a syndicated feed.)