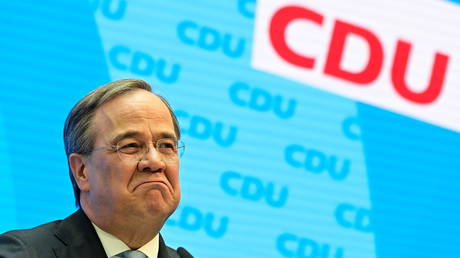 Germany’s center-right CDU/CSU bloc has fallen behind the Greens in public support after the Christian Democrats picked Armin Laschet as their chancellor candidate in the upcoming elections, one opinion poll shows.

The Union of Christian Democrats (CDU) and the Bavaria-based Christian Social Union (CSU) – the leading force in German politics for more than a decade under Chancellor Angela Merkel – have seemingly fallen out of favor with voters after the CDU chose Merkel’s latest successor at the helm of the party as its top candidate for the upcoming general elections in September.

The CDU/CSU has lost six percentage points since April 14 and has fallen behind the Greens, according to a Tuesday opinion poll by the Forsa Institute, one of the leading market research and opinion polling firms in Germany. The block currently polls at a mere 21 percent, some 11 points less than its previous federal election result back in 2017. At that time, the 32.9 percent received by the union was not considered a particularly strong result either.

The Greens, however, apparently have gained momentum over the last week. The popularity of the party, which also chose its own chancellor candidate – Annalena Baerbock – rose from 23 to 28 percent, up from a mere 8.9 percent in the 2017 elections.

For the first time in their 40-year history, the Greens now have a chance to become the strongest party in the German Parliament, the Bundestag, potentially propelling their top candidate to chancellorship. The candidates’ personalities could play a more decisive role in this outcome, according to the poll.

More than half of Germans surveyed welcomed Baerbock’s nomination, while support among her fellow party members sits at nearly 80 percent, according to the Forsa Institute’s data.

Less than a third of those polled supported Laschet’s nomination, while his rival to become a CDU pick – the leader of Germany’s Christian Social Union (CSU), Markus Soeder – appeared to fare much better. The head of the CDU’s Bavarian allies boasts some 47 percent of public support, according to the poll. Soeder is favored even more among the union’s backers. Some 58 percent of the CDU supporters and 88 percent of the CSU said they would rather see Soeder as the chancellor candidate.

Two thirds of respondents said that a procedure “in which the CSU would have been involved” would have been a fairer one and the overwhelming majority of both CDU and CSU supporters cried foul over the selection process.

If Germans could elect their chancellor directly, Baerbock would most likely secure a victory by gaining 32% of the vote and leaving Laschet and another major rival – Social Democrat Olaf Stolz – behind with 15% each, the poll showed.

Laschet is known as a staunch Merkel loyalist and a supporter of European integration. His political program, involving a nation “of diversity” fighting for a “better world” through countering “authoritarian social models,” also appears to be in line with the policies of one of Germany’s longest-serving chancellors.

Baerbock, who made it to the top of the party within a few years, has a history of somewhat controversial proposals. Back in 2019, she was among a group of lawmakers seeking to introduce a climate clause to any future draft legislation to ensure that it would not harm the global fight against climate change.

The latest Forsa Institute poll, commissioned by the German RTL media group, was based on interviews with 1,502 people surveyed on April 20.