Two friends who have helped each other through life changing illnesses have taken on a cycling challenge to raise money for the NHS teams who’ve treated them.

They did this to thank the staff at the Cancer Centre at Guy’s Hospital for treating Jeff’s rare form of skin cancer and Barnet General Hospital for caring for Gary after he contracted COVID-19.

In a show of support for their fundraising, members of Jeff’s medical team joined the pair for the ride.

Grandfather-of-two Jeff has been living with a cancer called Cutaneous T-Cell Lymphoma (CTCL) since 2007.

Around 200 people are diagnosed with CTCL each year in the UK, where T-cells, the white blood cells that fight off infection develop abnormalities and attack the skin.

For most patients it remains a chronic condition but in 10 per cent of cases it spreads internally and becomes life threatening. 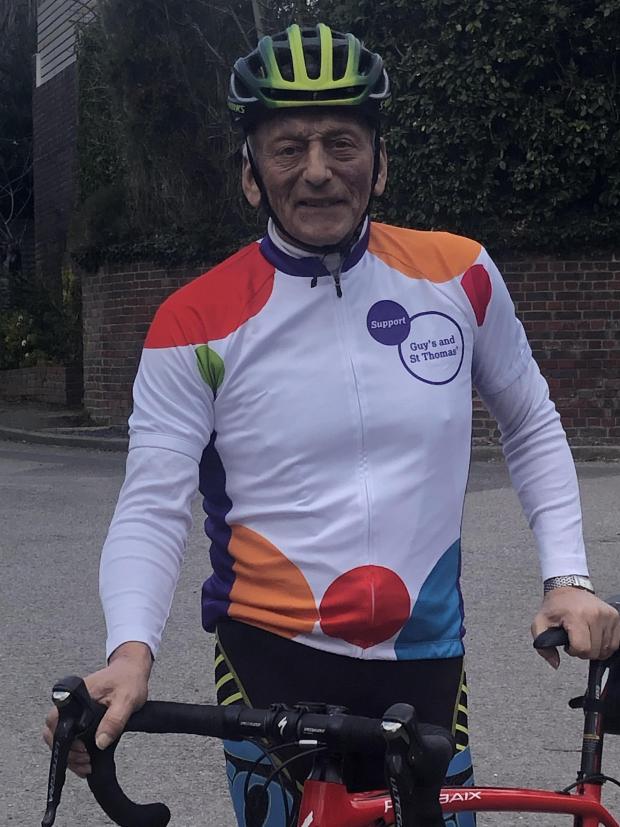 Over the years the retired accountant has remained stable under the care of two specialists at the Cancer Centre at Guy’s, dermatologist Professor Sean Whittaker and oncologist Dr Stephen Morris.

In March 2020 Jeff’s neighbour and cycling buddy Gary Colet contracted COVID-19 and was admitted to Barnet Hospital remaining there for the next three months including five weeks on a ventilator.

On returning home Gary had lost a third of his body weight, recovery was gruelling but by getting back to his passion of cycling with Jeff encouraging him, he started to gain strength.

In November, Jeff received the news that his cancer had spread to his lymph nodes, he said “this was a horrible shock to hear the cancer was now life-threatening especially as I’d felt so well”.

He was swiftly started on a programme of chemotherapy and radiotherapy but it was made clear that this would not hold the cancer indefinitely.

For a long-term remission and even possible cure Jeff would need a stem cell transplant. As he doesn’t have siblings a suitable donor was sought through the international register.

In January Jeff was told that there were signs the chemotherapy was working and also a suitable donor had been found in the USA.

The transplant is due to take place in early June at Hammersmith Hospital under the care of Dr Renuka Palanicawander.

Jeff said: “When my diagnosis came I knew the best way I could deal with this, emotionally and physically, was to focus on my fitness and also do something positive for the teams working so hard to keep me well.”

On Saturday April 17 after Jeff had completed 10 sessions of chemotherapy and before his transplant, he and Gary completed the equivalent of the London to Brighton Bike Ride which is more than 50 miles and 2,500 feet of elevation, riding from north west London into the Hertfordshire countryside.

At a consultation Jeff mentioned the ride to Prof Whittaker and Dr Morris and made a joke that they had to do it with him.

Jeff added: “I was astonished and delighted that they both said they were on board with idea.

“This was made even more incredible when Dr Palanicawander and one of the nurses who helps to administer my chemo, Annamaria Kostikova, agreed to ride too.”

Jeff is raising funds to be split equally for research by the Skin Tumour Unit Fund and Radiotherapy for Skin Lymphoma at the Cancer Centre at Guy’s where the key researchers are Professor Whittaker and Dr Morris.

After completing the ride, Jeff said: “The ride was fantastic and we couldn’t have asked for better weather.

“Though the chemo has slowed me down, having everyone cycling with me really helped me to keep on going, I’m extremely thankful to everyone who has donated so far.”

Dr Stephen Morris said: “When Jeff first mentioned the ride it didn’t take long before Professor Whittaker and I decided we’d like to get involved too.

“It’s an amazing thing that Jeff and Gary have done and a testament to their determination to turn a difficult situation into something so positive.”