Cary, N.C. — While 2020 has been a tough year, there have been moments of kindness and hope, especially for one Wake County rescue dog.

Throughout her ten years of living in North Carolina, Beverley Winfield says she has fostered around 70 dogs.

She often fosters dog that are sick or injured, including most recently one-year-old Staffordshire terrier mix Vardy.

Vardy was found as an injured stray and spent a week at Wake County Animal Center before heading to Winfield’s home. He had a severe leg injury that doctors assumed was either from being hit by a car or getting caught in an animal trap.

“It was completely broken and he wasn’t able to put any weight on it at all,” described Winfield.

His leg was beyond repair and had to be amputated. Through the help of neighbors and Best Friends Pet Adoption, Winfield began fundraising for Vardy’s treatment.

Thankfully, Vardy’s GoFundMe raised over $3,000, which covered all of his expenses.

“People were amazing in their support. I still get emails on a regular basis asking me how he’s doing and wanting an update about him,” Winfield added.

After surgery to removed the injured leg, Vardy spent the next five months with Winfield and her husband while he recovered from the amputation, underwent neutering surgery and treatment for heart worms.

“He was scared, we had to be very gentle and slow and take our time with him,” explained Winfield.

“He came along leaps and bounds over the past months. The poor boy had been through so much,” Winfield said.

“Every day we saw his weigh going up, his coat getting shiner and his confidence building,” added Winfield. “He really turned his life around. It was wonderful because it’s so rewarding to see the transformation.” 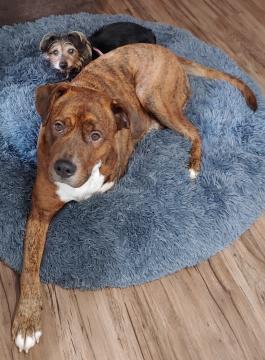 Winfield’s no stranger to fostering pets, including kittens from Alley Cats and Angels with and pot-belly pigs with Blind Spot Animal Sanctuary.

“A lot of people say to me, ‘Why do we do it? How could we let them go? Oh, I can’t do it because I would never be able to let them go.’ My answer to that is, by letting them go, we can save another and I really want to foster and really want to make a difference,” she said.

Since moving to the state, she’s fostered as a way to help the animal community.

“We had no idea how bad the situation was with unwanted dogs and how many were being euthanized on a daily basis,” Winfield said. “We realized that there was a big issue of unwanted animals and not enough people to help get them out of shelters.”

While Winfield explained that it’s hard to say goodbye to fosters once they head to their ‘furever’ homes, it’s rewarding work.

“We get a lot of pleasure from getting them, pulling them when they’re broken and seeing them turn around and become happy, healthy dogs in good homes,” she said.

Despite the gratification, it doesn’t make the goodbye easier, especially when it came to Vardy.

“It’s always hard and it always hurts but it’s bittersweet,” described Winfield. “He really dug his way deep into our hearts, so [it’s] very, very sad but also happy.”

Earlier this week, Vardy went to live with his new family, who have another ‘tripawed’ dog, Chase. Chase and Vardy both have their right leg amputated.

“He’s settled in, he likes his new buddy and they absolutely love him,” said Winfield. 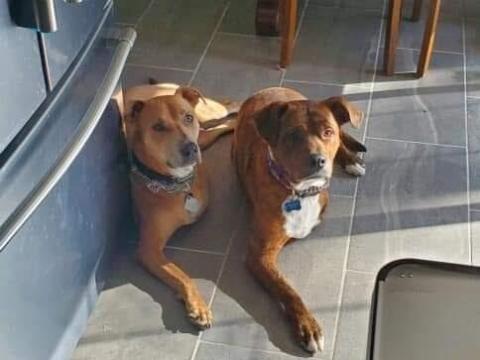 For Vardy, it’s a happy ending, but for Winfield the work isn’t over. While she typically takes a few weeks to make sure a foster is adjusted in a new home, she’s also looking for the next dog in need of help.

“I’ve got my eye on the websites and if I see one that really needs us, then there’ll be another one here,” Winfield said.